Rolls Royce is a name synonymous with style and elegance; the cars made by this company are renowned for their luxurious nature as well as the quality of their design and manufacture. Over the years this model from Rolls Royce has developed into the ideal and traditional wedding car.  There are of course different eras with varying types of classic Rolls Royce designs, pre world war 2 are all classed as either historic or vintage and anything built within approximately the last 30 years or so would be regarded as modern.

Rolls Royce and Bentley cars were built with comfort in mind, adequate interior space space and design were important to their prestigious customers; these features provide all the requirements for an ideal wedding car.
Famous stars from the 50’s and 60’s were proud to own these cars, as they became a status symbol for the rich and famous, stars such as John Lennon and Mick and Bianca Jaggar owned a Rolls Royce Silver Cloud.

The Rolls Royce Silver Cloud is possibly one of the finest wedding cars that you can hire, always in demand due to its sheer presence and stature. There is ample leg room inside and that alone can make it the ideal choice for a wedding car. This car offers supreme luxury and ride comfort and is famed for its reliability and near silent engine.  A long wheel base version, lengthened by 4 in (101.6 mm), was also made available in September 1957, outwardly very similar to the existing car, but offering improved leg space for rear seat passengers.

The Silver Cloud II was introduced in 1959. Little changed externally but it now had a 6.2 L V8 engine, which pushed the weight to 2.11 tonnes. Performance was greatly improved and top speed was raised to 183 km/h (114 mph), but the main improvements were in acceleration and torque. Power steering became standard. Electrically operated windows were now available as an option.

The basic architecture of the Silver Cloud II did not change between 1959 and 1963, but there were numerous minor changes implemented, notable among them a succession of improvements to the ventilation system. Interior changes in 1961 included the adoption of blue instrument lighting, the introduction of a combined indictator / headlamp flasher switch and of a handbrake warming light. A remodelled rear light assembly was introduced in May 1962 and a change to sealed-beam (still at this stage single) headlamps was made in August 1962. 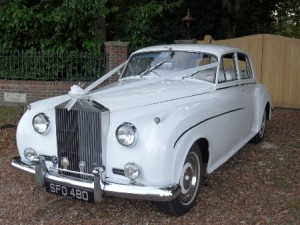